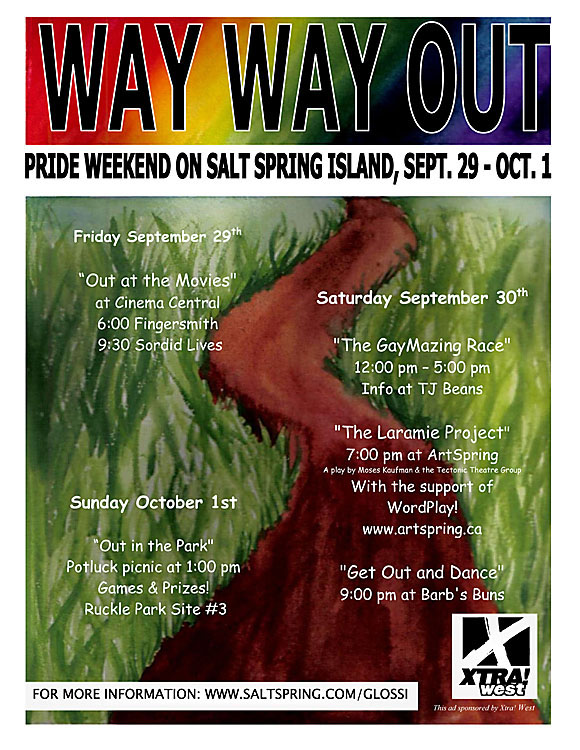 In 2006, GLOSSI continued to expand its involvement in the community, and again held a very successful Pride Weekend. The Board worked on some internal changes for GLOSSI, including specifics of membership fees, a new membership form, and an improved website with more Pride_2006-Poster Laramie-2006-posterGLBT businesses included. Other issues were as follows: designating community events as being sponsored or partnered by GLOSSI, developing rules for emails sent to members, surveying members about events and Pride, and switching our monthly meetings to the Seniors Centre. We became more involved in the whole community by giving input to the annual Film Festival, by involvement with GISS (our secondary school) through the GSA and by supporting Out in Schools, by participating in Thrifty’s Smile Cards program, by starting discussion on scholarships for GISS students, by having a booth at our Fall Fair, and by petitioning the government re: same-sex marriage. We had social events for our members including the following: an outdoor hiking group, Winterlude dance, Winterlude potluck, and a presentation at ArtSpring by the wonderful Vancouver Men’s Chorus. Our Pride activities continued to gain recognition in the whole community, with a presentation of the hard-hitting play, The Laramie Project, a film festival, our GayMazing Race, and, of course, the Pride Dance (often referred to as the best dance on the island).